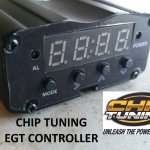 Diesel engines are not indestructible. Aside from running a diesel without oil, or filling the fuel tank with gasoline instead of diesel fuel, few things will damage or kill a diesel engine faster than excessive exhaust gas temperature (EGT), yet strangely enough, no diesel 4WDs or motor-homes come equipped with a pyrometer as standard equipment to monitor EGT. During normal operation of such vehicles, EGTs usually stay within safe limits, but situations can occur when power add-ons like Diesel Chips are added and the where the EGT gets too high, doing serious engine damage without any warning to the driver. A pyrometer that displays a diesel’s EGT can warn the driver of dangerous conditions before such damage occurs.
That’s why a Chip Tuning EGT Controlled Remapping Module with EGT Gauge and Pyrometer is part of our High Performance Power Solutions Module and probably why the system is one of the most popular items we sell.
A pyrometer is a temperature gauge designed to measure high temperatures above those measurable with an ordinary thermometer. It consists of a temperature-sensing probe (thermocouple) that is placed in the area, or flow, to be measured. The probe is connected to a gauge, which is located a safe distance away from the high temperature source. On a diesel, this means the pyrometer sensing probe is mounted in the exhaust manifold or immediately after the turbine outlet of the turbocharger, and the gauge is mounted in the driver’s compartment. The purpose is to measure and display EGT in degrees Celsius (C.). Where the probe is positioned before the turbine section of the turbocharger, the EGT may also be called the turbine inlet temperature. As you would expect, EGT measured after the turbo is called turbine outlet temperature. 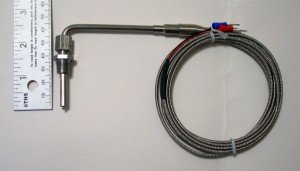 We might mention that some mechanics fear installing the pyrometer thermocouple in the exhaust manifold for fear the probe will break or burn off and blow into the turbocharger. Such a piece of foreign material entering the turbine would cause serious damage that could in turn break the compressor wheel of the turbo, sending broken pieces into the intake system of the engine where even more damage could occur. While the above scenario is scary, it is also unlikely. Today’s quality pyrometers feature thermocouples that are sheathed in stainless steel to prevent just such an occurrence. It is exceedingly rare to find a diesel mechanic that can honestly say he’s ever seen a thermocouple that has failed and fallen into the turbo on a diesel pick-up or motor-home. It just doesn’t happen with a good pyrometer like what is offered with the Chip Tuning product.

Whether the pyrometer thermocouple is mounted before or after the turbine is usually a matter of finding a suitable mounting location or a convenience one. It should be noted that when the EGT is measured after the turbine, the turbine outlet temperature at full throttle or under a heavy load typically would be circa 100 Deg C. lower than the EGT measured in the exhaust manifold. The temperature drop after the turbo indicates the amount of heat energy in the total exhaust gas flow that was used to drive the turbocharger. The temperature drop through the turbine is also related to the total flow and speed of the flow through the turbo. At part throttle, under light load, such as cruise conditions, the turbine outlet EGT may be 250? C. lower than the turbine inlet temperature, but the total exhaust flow is much less than at full throttle. At high turbine speeds (under heavy load) the exhaust gases simply don’t have time to give up as much heat energy as they speed through the turbine. This variance is why installation of the thermocouple in the exhaust manifold is considered more accurate, however, as mentioned the fitment after the turbo is not problematic. The EGTs discussed in the remainder of this article will all be turbine inlet temperatures.
At Chip Tuning, we recommend the installation of a quality, fast acting pyrometer on any turbo-diesel vehicle. It’s an inexpensive upgrade that allows the driver to keep his engine out of EGT trouble, and it can even be a guide to optimum fuel economy.
So why are EGTs important? EGT is an indication of how hot the combustion process is in the cylinders, and the amount of “ after-burning” that is occurring in the exhaust manifold. EGT is also directly related to the air/fuel ratio. The richer the air/fuel ratio in a diesel, the higher the EGT will be. Two things can create a rich mixture under heavy loads or at full throttle: the first is too much fuel, and the second is not enough air. That seems simple enough, but it’s the second part, not enough air, that could get a stock, unmodified truck or motor-home in trouble. Anything that restricts intake airflow, or intake air density, limits the air mass that gets to the cylinders. Think of it as the amount of oxygen getting to the cylinders to support the combustion of fuel. This could include: a dirty or restrictive air cleaner, a partially blocked air intake, high outside air temperature, high altitude, restricted airflow to or through the radiator or inter-cooler, and high water temperature. The vehicle’s water temperature gauge will provide a warning of a cooling system problem all too late and other problems aren’t likely to be noticed without a pyrometer unless the driver notices excessive exhaust smoke.  A pyrometer also reacts more quickly than the water temperature gauge, so it allows the driver to spot a problem sooner and avoid engine damage.  A restrictive exhaust system can also reduce the airflow through the engine, resulting in a rich condition. Any of the above conditions can result in excessive EGT if the vehicle is working hard, such as pulling a heavy load, running at sustained high speed, subjected to climbing a long grade, etc.  With regards to the amount of air available, our Performance Module will actually increase air flow by adjusting turbo boost automatically in relation to the load of the engine on most common rail vehicles.  Just another reason to trust a Chip Tuning Diesel Performance Module. 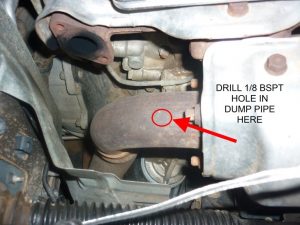 Chip Tuning has relocated to: